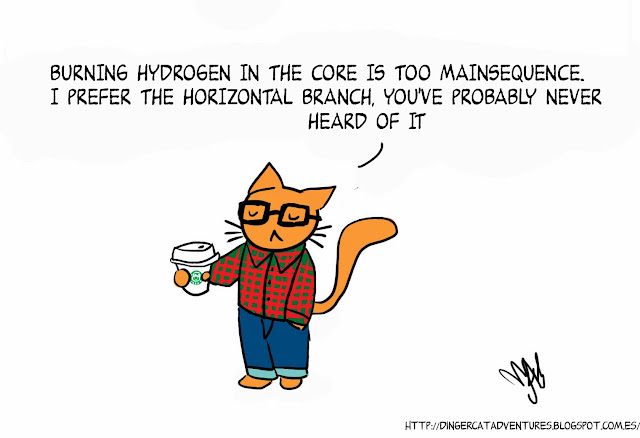 Ok, I know, I own everyone an explanation. Yes I'm alive, and yes, I'm trying to be back! I'm really really sorry for all the Dinger fans that have been waiting for new comics all this time. After I graduated, I spent the summer traveling and then went very busy starting my Master and everything. The truth is I've been lacking of ideas during all this time. I think I need new inspiration which is diffcult now that I'm not studying general physics anymore. Before I usually had the best ideas during courses, but now that I'm doing my MSc in Astrophysics it does not come so easy.
I really want to continue drawing the amazing adventures of Schrödinger's cat so I'll try to make an effort and to search for new ideas, lets see if I can do this at least twice a month. You've probably going to see a lot of jokes about Astrophysics from now on, but I'll try to keep touching every field in Physics.
As you can see I've changed the writing in the comics, since I found my handwriting a little difficult to read sometimes, so I replaced it for a typical comicbook font, I hope you like it!

For today's comic you must know about Mainsequence which is the longer and most stable phase of star evolution and lasts since they start burning the hydrogen in the core until the hydrogen is full consumed. Typical stars like the Sun are observed in the main sequence while few hipster ones have evolved and stay in the latter phase called Horizontal Branch having starbucks coffee and writing on Mac's for years.

Yeah, maybe they’re not just trying to catch their tails…
Today, some classical mechanics with conservation of angular moment: A basic and still beautiful concept. If everything goes right, I’m graduating in less than a month That’s just how I’m feeling about my close future.
Cheesus, exam period is about to start… wish me luck!
Publicado por Unknown en 0:18 1 comentario: 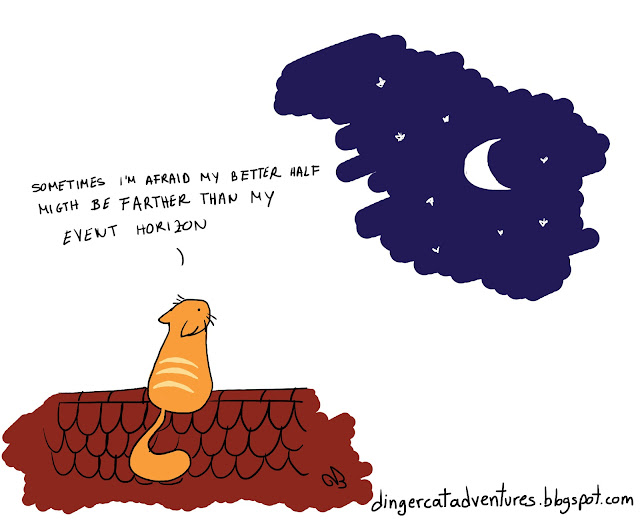 This semester I'm studying cosmology and it's the time to learn about cosmologic horizons. Event horizon is probably the saddest concept I've ever heard! Just listen: Two particles separated farther than the distance of the event horizon will never EVER meet each other in the history of the universe due to its accelerating expansion. Isn't it devastating? But hey, don't get down, every single partcile was in contact with others at the start, so they will never forget about each other. Thats the reason for thermodynamic equilibrium in the universe! :)

Who needs to go to the gym when you have special relativity?
I was supposed to be studying, but... too tired.... blergh.
Publicado por Unknown en 13:46 1 comentario: 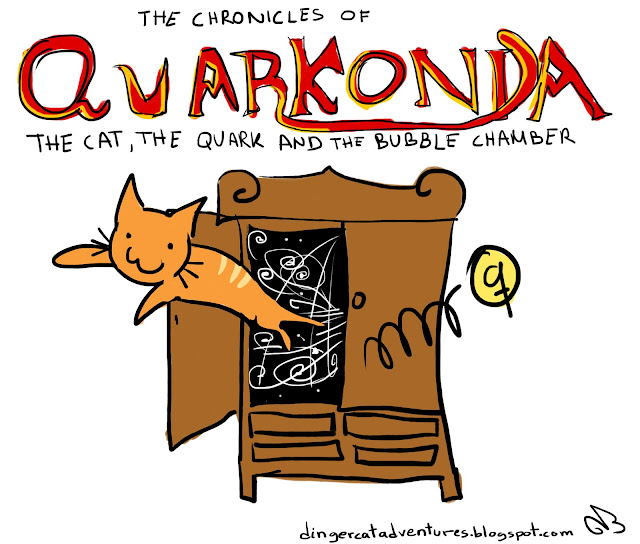 Quarkonium, in plural Quarkonia are flavorless mesons composed by a quark and its own antiquark, like charmonium and bottonium. Learn more here.
So, we were in our Nuclear Physics class when we read the term 'quarkonia' in our text book. My mate Sara suggested that it sounded like the name of some fantasy world and thats how The Chronicles of Quarkonia came up!
Publicado por Unknown en 8:38 No hay comentarios:

This is a blog dedicated to the webcomic Adventures of Schrödinger's cat, a comic strip about this little curious scientific cat that is always dead & alive at the same time. He wants to make you smile while he teach some basic concepts about physics and science in general.

I'm a physics student at Universidad Autónoma de Madrid. I'm a great animal lover and a photography and illustration enthusiast.